Another long spell has passed since my last post, but that is how they seem to go.  We’ve had Thanksgiving, Christmas, and New Years in that time and as with any budding family a lot has happened.  Sometimes I long for a time when I can go two or three months between posts and come back to say “Nothing has happened here.  Same ol’ same ol’.”  I guess that is not my lot, though, and I’m happier for it too!

We went to California for Thanksgiving and stayed with Aimee’s mother and grandmother.  Aimee and Sara actually went out a week before me as this would be our last visit while Aimee’s mother was still living there.  She mostly went to see friends and help her mom pack up and finish going through things.  When I arrived the following week our anniversary had just passed so we left Sara with Grandma (her first extended time away from Mommy) and drove up to Santa Barbara.  We did some wine country touring up in the mountains and really just relaxed.  For those that didn’t know, Aimee went to school at UCSB and absolutely loves it there.  I, in all honesty, do too – you’d have to see my twitter feed for more on that though (maybe I’ll post about my infatuation love ‘intense belief in’ ‘value recognition of’ hate of most “social networking”).  By the time we returned from our little vacation my family had arrived in the Inland Empire and we had Thanksgiving dinner at my sister’s house.  Aimee managed to  have our flight home switched from Friday morning to Saturday morning (for free – she pulled the baby card) so we were able to spend another day at her mom’s.

Our next big event – at least that I can remember – was Aimee’s mother’s big move!  The movers came the second week of December, packed up all of her stuff, and we accepted it at her new Texas home a few days later!  Aimee’s mother came along shortly thereafter with a packed GMC.

While she was getting all settled, Aimee, Sara, the dogs, and myself trekked down to Houston to celebrate Christmas with my family.  Everybody had a great time.  Sara got a rocking horse which she absolutely loved! 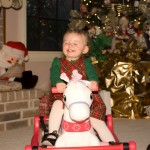 A particularly wonderful blessing this season was that we had the opportunity to spend Christmas at our own home for the first time.  Our family met Aimee’s mother and grandmother at church after I got home from work for the children’s Christmas Eve service and then followed that with dinner.  I had to be back at church to accompany a brass quintet at the 8 and 11 o’clock services.

Oh – did I mention that we had a blizzard on Christmas Eve in Dallas?  There was not a whole lot of snow, but there was a lot of it blowing around causing dangerous drifts.  Needless to say, the weather cut back a bit on church attendance.  I made it home safely though by about 12:30 am.

We awoke to a leisurely, beautiful morning on Christmas day.  Sara actually slept in a little bit and Aimee let me sleep too.  As we were eating breakfast we noticed that Sara had left the table and seemed strangely quite.  When we went to find her she was on the hearth beginning to open presents!  We let her go through a few and then we all (including Jack and Frank) went out front to play in the snow.  Sara needed a nap before she could go through the rest of her gifts, but that worked out well because she could nap until Grandma and Great Grandmom arrived for lunch.  All in all it was a great day.

The big news for today is that Sara said some words!  Now – she has been communicating for quite some time…we think that “graps” (read Grapes) was really her first word, but today came some new ones.  We noticed last week that she was beginning to try to mimic what we were saying when we spoke to her, and we knew that it would be very soon.  Today, as Sara and Aimee walked through the market (getting Sara’s daily snack samples) she pointed at the fish tank and said “FISH“!  Exciting, I know!  This was followed later in the day by “BALL” and “PISA” (I brought pizza home from Sam’s Club for dinner).  So, we can now tell everybody that in the last three weeks Sara has had 6 teeth come in and has decided to start using her words.  I’m glad that she has finally listened to me on this as I have been encouraging it since she was about 6 months old…I told her to just “use your words” and “tell us what was wrong” instead of crying and screaming about it.  Now that she has words somehow I still feel like we’ll still hear the crying and screaming (by my count the next time will be in approximately 7.5 hours).