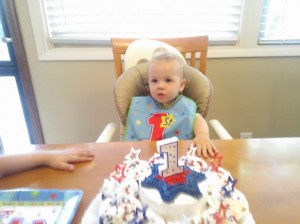 Joshua turned 1 year old on May 3rd, and this first year has gone incredibly fast.  We’re not big on parties when our children are this young, but we made sure that he had the opportunity for cake.  He got to open presents (when his sister Sara let him), and he seemed to really enjoy it.  He scored a new library worth of books from all of his grandparents and aunts.  He also got a Bob the Builder giant Lego set and watching him walk around with this giant bucket held out in front of him is pretty amusing.

He’s a very mobile dude now and has pretty much given up on crawling.  Even though he first walked around 9 or 10 months he kept to crawling for another month or so for primary locomotion.  He’ll be running any time now since he always watches his sister.  Sara is in a constant state of run.  We challenged her to only walk while we were in the store the other day and it was obvious that she was having to exercise some self control.

Joshua’s 1 year checkup was pretty uneventful.  Basic stuff – development, height, weight, etc.  He’s is now 21 lbs and 30 inches – quite a change in a year.  Unfortunately, his last round of inoculations have left him a bit sick, but only low grade fever…so – expected stuff.  At least he’s cuddly when he’s not feeling well as opposed to his normal constant state of motion.

This entry was posted in Joshua, Update and tagged Birthday, Cake, Joshua. Bookmark the permalink.